Never did I thought that I’ll dive on this craze of blogging. Further, it’s quite fun and to think of it… seemed it has a way of putting ones reflection saved. Should a I say “Saved”, yes saving it. I need not to explain more… cause all of you readers knows this.

More to come… Logging in….

Here’s the pic with Mi Amor:

This entry was posted in Personal. 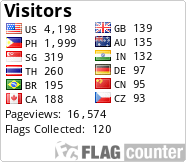